A city walk. A bus ride. A roma-party.

ROMA shows the hidden Copenhagen of the romas, and Gina is our guide. Gina is an expert. She is from Romania herself and for years she has been begging in front of Coop in order to be able to send money home to her three children. She learned English in prison by watching American TV-shows nonstop, until she was released because of lack of evidence.

Georgi is a roma-musician from Romania. What he has experienced is that the Danish people love the music and the dancing, but that they are not fond of the people behind it. A YouGov-Survey from the previous year shows that 72% of the Danish population have a negative view on romas.

Georgi takes us along with him in a roadmovie through Europe, along the German highways and all the way to the villages where the beggars and bottle collectors come from.

Gina, Georgi and other romas in transit invite us to a roma-party filled with music and dancing.

Roma is a city walk. A bus ride. A roma-party.

Participants: Gina, Georgi and other Romanian romas in transit.

ROMA is a walking performance by Paradox Intertainment and Sort/Hvid 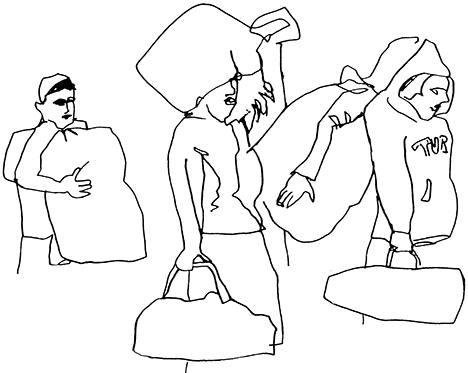